We welcome your comments and postings on our blog

Anti-choice extremist groups in Michigan through a coordinated effort will soon start circulating petitions with the goal of banning private insurance providers from supplying health insurance plans that cover abortion. Women who decide to have abortion coverage would be required to purchase a separate abortion rider.

This radical initiative would provide no exceptions for rape, incest, or women's health. Less than 3 percent of Michigan's citizens could become the architects of this law by providing 258,088 signatures gathered over 180 days. Once the Michigan Legislature receives the completed petitions, this body will have 40 days to approve them and then the initiative becomes law.

Recently, the Republican-dominated Legislature and Right to Life of Michigan failed to bring this legislation to fruition. However, this alternative strategy makes their objective much more achievable. This extreme, anti-women's health initiative needs to be defeated. Michiganders have it within their power to defeat this invasive and outrageous proposal by simply declining to sign the petitions. A victory for anti-choice extremist groups and legislators will strike another blow to women's self-determination.

The Effects of the Sequester

Painful cuts. When it became evident that the sequester would commence on March 1, Republican Speaker of the House John Boehner asserted, “I got 98 percent of what I want.” Although Democrats in the U.S. House of Representatives offered several sequester replacement bills, House Majority Leader Eric Cantor expressed that he couldn't think of anything that Republicans would be willing to do in order to reach a deal to prevent sequestration from taking effect. Republican lawmakers at that time appeared to be downright giddy about the sequester. One GOP legislator referred to sequestration as “the first significant tea party victory” in D.C. Another indicated that the cuts are “a home run for America.” Because of the Republican Party's mischaracterization of the sequester, many Americans have opted to simply ignore it. But now the reality of the sequester's effects are becoming too painful to ignore. Numerous states are experiencing federal budget cuts, including a $22 million decrease in funding for primary and secondary education, as well as a $20.3 million reduction in educational services for children with disabilities. Many jobs for teachers and aides are at risk. Some 70,000 fewer children across the country will be served by Head Start which responds to the early educational, developmental and nutritional needs of primarily poor children. A number of senior citizens will find it more difficult to meet their nutritional requirements because Meals on Wheels is on the chopping block. Individuals seeking domestic violence services will find a dramatic decrease in assistance. In addition, tuition aid for students in the military has stopped. As if these cuts aren't painful enough, on April 1, cancer clinics nationwide started turning away thousands of Medicare patients because chemotherapy medicine is so costly and makes it impossible for these clinics to remain financially solvent. Now Republican legislators are trying to blame the president for sequestration's cuts to the airline industry which have resulted in a reduction in air traffic controllers. Furthermore, the director of national intelligence, James Clapper, recently reported to the Senate Armed Services Committee that the sequester's cuts hinder the intelligence community's capacity to thoroughly investigate plots against the U.S. Once again, the Republicans have chosen party over country, resulting in suffering for millions of Americans. Jill Farber-Bramson West Bloomfield
Posted by West Bloomfield Lakes Area Democratic Club at 9:59 AM 9 comments:

The Right Way to Fix Medicare

Congress and the President are trying to "fix" Medicare by cutting benefits to Seniors or raising the Medicare eligibility age. This book explains that Medicare needs to be fixed by cutting payments to insurers, hospitals, pharmaceutical companies, and other companies which make huge profits from it. 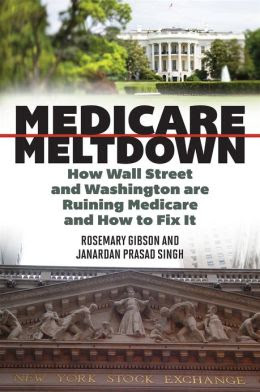 Medicare is known as an entitlement for the nation’s seniors. It is also the largest entitlement-based program for any business sector in the US economy. Its beneficiaries include hospitals, doctors, drug companies, device manufacturers, Wall Street investment banks, private equity firms, hedge funds, and others that rely on the $600 billion that Medicare spends a year.

Send Comments and Posts to: Info@Wbldems.Info